The 7 Trumpets in the Book of Revelation

The 7 Trumpets of the book of Revelation

As terrible as they sound when one reads about them, and as terrible as they will be for mankind when they take place, the 7 Trumpets in the book of Revelation are not God bringing Judgment mankind.  Only the 7th Trumpet is a judgment.

The other six Trumpets are WARNINGS to mankind to repent of sin and to put one's faith in Jesus Christ while there is time to do so.  One day the door will be closed on that opportunity.  Come to Christ NOW and ask that God forgive you by putting your trust in Christ's death on the cross and resurrection from the dead, and in nothing else, as payment in full for your sins, is the message of the first six Trumpets.

But notice what is said in Revelation 9:20-21 about the attitude people have on earth even after the Sixth Trumpet has been blown:

9:20 The rest of mankind, who were not killed by these plagues, did not repent of the works of their hands nor give up worshiping demons and idols of gold and silver and bronze and stone and wood, which cannot see or hear or walk, 21 nor did they repent of their murders or their sorceries or their sexual immorality or their thefts.

God has told us his purpose for these first six Trumpets.  They are a final warning before his wrath begins.

Note the major announcement made by a mighty angel in chapter 10 about the blowing of the 7th Trumpet.  People have not repented, so the Lord says, "there would be no more delay."

Then notice what is said in chapter 11 about God's wrath, once the 7th Trumpet has been blown.

Then the seventh angel blew his trumpet, and there were loud voices in heaven, saying, “The kingdom of the world has become the kingdom of our Lord and of his Christ, and he shall reign forever and ever.” And the twenty-four elders who sit on their thrones before God fell on their faces and worshiped God, saying,

“We give thanks to you, Lord God Almighty, who is and who was, for you have taken your great power and begun to reign. The nations raged, but your wrath came, and the time for the dead to be judged, and for rewarding your servants, the prophets and saints, and those who fear your name, both small and great, and for destroying the destroyers of the earth.”

Posted by Gordon Magee at 9:35 AM No comments:

Are we near the end of the age?

August 2020 Recent events in the news have many people, Christian and otherwise, wondering out loud if we are nearing the end of the age whe... 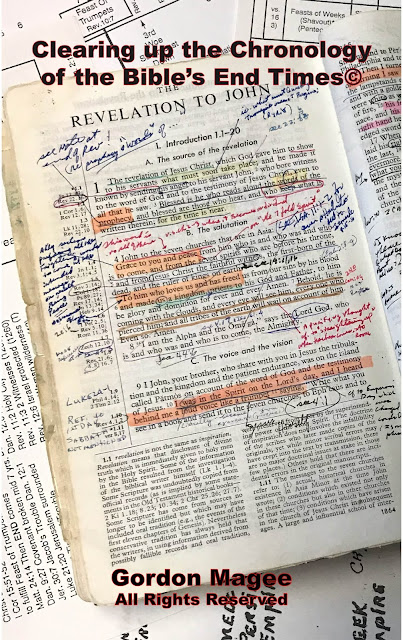 Gordon Magee
* 11 years as Journeyman Ironworker working off the ground, and as a fitter and welder; * 20 years as a full time pastor in the US and Canada, during which I served for 9 years on the Board of Governors for Trinity Western University in Langley, British Columbia, the largest privately funded University in Canada and the home of the Dead Sea Scrolls Institute; * 13 years as head of Internet Marketing, Television, Public Relations for Drs. Foster and Smith pet supplies at the time the largest catalog and online seller of Pet Supplies in the United States. E-mail your questions